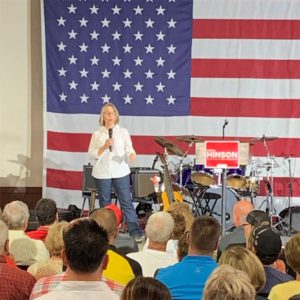 Republican Congresswoman Mariannette Miller-Meeks of Ottumwa says the withdrawal from Afghanistan is “an operational failure.”

“I served 24 years in the military, enlisted in 1974, and the next year saw the fall of Saigon,” Miller-Meeks said this weekend. “My brother served in Vietnam and what I have watched over the past two weeks is a travesty.”

Miller-Meeks was a private and a nurse in the Army. She became an eye doctor and retired from the Army Reserve at the rank of lieutenant colonel. Last week, she called on President Biden and four top Pentagon officials to resign.

“My staff often tell me when I’m passionate, I often sound like I’m angry. I’m going to tell you something: I am angry,” Miller-Meeks said this weekend. “I’m outraged.”

Miller-Meeks was among the speakers at Republican Congresswoman Ashley Hinson’s fundraiser on the Linn County Fairgrounds on Saturday afternoon. A man in the crowd, responding to Miller-Meeks, yelled that Biden should be tried “for treason.” Miller-Meeks said she and other veterans in congress had been pushing the Pentagon for months to secure the safe evacuation of Afghans who had assisted in the war effort.

Earlier in the event, the crowd observed a moment of silence in honor of the 13 American soldiers, including a Red Oak native, who died in Thursday’s attack at the Kabul airport. When Miller-Meeks got on stage, she asked all the veterans in the crowd to stand and be recognized.

“And you deserve not be betrayed by the president of our country!” Miller-Meeks said.

It’s already Monday night in Afghanistan. Reuters is reporting the final hours of the U.S. withdrawal are underway, with a group of diplomats and Afghans deemed at extreme risk flying out ahead of Tuesday’s deadline for all U.S. troops to leave. Vermont Senator Bernie Sanders, who ran against Biden in the 2020 Democratic Primary, defended the withdrawal during a speech in Cedar Rapids Sunday afternoon.

“The good news is that after 20 years of war, after the loss of 2400 members of the U.S. armed forces and after a trillion dollars of spending, our troops are finally coming home and that war, for us, is coming to an end,” Sanders said, to applause from the crowd.

Sanders then asked the crowd to applaud the bravery of U.S. troops at Kabul’s airport who worked to evacuate 114,000 Americans and Afghan allies.

“The bad news, of course — and it is bad news, is that the corrupt government of Afghanistan collapsed faster than we thought, the Taliban is now in power and we are seeing death and chaos at the airport,” Sanders said.

Sanders expressed sympathy to the families of the 13 American troops who died last Thursday at the airport. Sanders was in Iowa Sunday to tout passage of a three-and-a-half trillion dollar federal spending package.