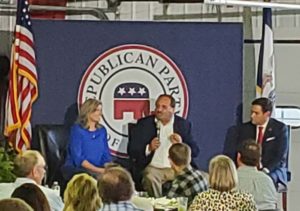 A few hours after the last U.S. troops left Afghanistan, Florida Senator Marco Rubio told a crowd in Iowa the Biden Administration’s handling of the withdrawal was “horrifying and indefensible.”

Speaking at an Iowa GOP fundraiser at the Mason City Municipal Airport tonight, Rubio said the pullout plan was based on assumptions that were not real.

“Why were those assumptions made? Number one, because of arrogance, because they knew better. They know better than everybody else, they went to certain schools, we’re the grown-ups, we’re in charge now, we’re the opposite of the people that were here before. We know what we’re doing, we’ve got this,” Rubio said. “That’s what they told everybody.”

Rubio said the Biden Administration’s August 31 deadline for withdrawal had nothing to do with the safety of Americans and our allies there.

Rubio, a member of the Senate Foreign Relations Committee, said the country’s credibility has taken a huge hit over the past two weeks as the world watched what was happening in Kabul.

“This is so damaging to our country, so humiliating, so embarrassing on the world stage, and so immoral,” Rubio said.

While other Republicans have compared the withdrawal to the fall of Saigon, Rubio compared it to the failed attempt to rescue hostages from the U.S. Embassy in Iran after it was seized in 1979.

“It’s really inexcusable and both sides know it. Even Democrats know it and you don’t see them rallying to the White House’s defense,” Rubio said. “You cannot defend what is so horrifying and indefensible.”

Rubio finished third in the 2016 Iowa Caucuses behind Ted Cruz and Donald Trump. He was asked during tonight’s event if Iowa’s Caucuses should go first in 2024 and Rubio said yes before the host got done asking the question. Earlier today, former President Trump told radio talk show host Todd Starnes that he plans to visit Iowa soon.