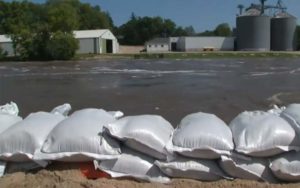 Heavy rains from last week have caused some flooding in northeast Iowa and rivers in other areas continue to rise.

The Turkey River near Elkader has crested already, at nearly three feet above major flood stage. Brian Bruening Boudouani owns a restaurant right beside the river and it will be closed for 10 days.

“We’re going to have to completely basically re-order all our vegetables and meats and stuff like that, even though they weren’t directly spoiled by, you know, floodwaters getting in, time is not your friend,” he says with a laugh.

The building’s basement was flooded with about three feet of water. The Turkey River’s crest in Elkader was the 4th highest on record.

“Right now we’re waiting for the water to go down so we can do assistance and damage assessment and then we’ll talk to all the businesses and see what their needs are,” said Elkader City Administrator Jennifer Cowsert. “Hopefully by the end of this week they’ll be able to move stuff back in. There’s some people that took the extra precaution to move things out of their first floor.”

On Friday and Saturday, nearly a foot of rain fell in some areas of northern Iowa. The Turkey River’s crest in Elkader was the 4th highest on record. The Wapsipinicon River hit a near record high in Tripoli. The Cedar River has risen, but was at low levels and isn’t expected to cause much flood damage.