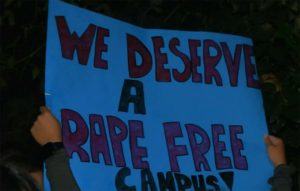 Police say a crowd of more than 1,000 people gathered at the Phi Gamma Delta or FIJI Fraternity in response to an online petition that accuses two members of the fraternity of rape last year. Police say windows and doors were broken and graffiti was written on the house.

Much of the crowd then went to another residence and did the same type of damage, as well as overturning cars. Police say the crowd broke up and no one was injured.

They are asking for anyone with video of the protest to contact them. The department also says it takes all allegations of sexual assault seriously and investigates them to the fullest extent possible.

The online petition has more than 92,000 signatures as of this afternoon calling for action in the case, and for the FIJI fraternity to be kicked off campus.