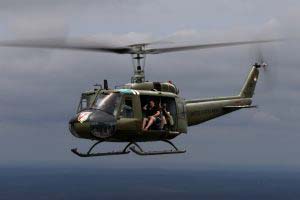 Taking thrill rides in a Vietnam-era UH1 helicopter — or a Huey — will be the focal point of events over the next two weekends in western and central Iowa.

Jeff Dentlinger of Carroll is a former chopper pilot and one of the organizers of the events — called Flights for the Brave. Rides in the historic copter are to honor all veterans, especially those who served in Vietnam who he says often don’t get the recognition they deserve.

“So, to be able to start this by having a Huey helicopter coming up from Alabama was awesome for me and then to have it in our hometown and to have Ames jump onboard right away, everything just fell in the way it was supposed to,” Dentlinger says. “We’re really excited about this.”

He says seeing the Huey, which was the flying workhorse of the Vietnam War, is an emotional experience for some veterans.
“If you want to hang out, look at the helicopter and talk to the crew, Wednesday, September 8th, they’ll be at the Carroll Airport and not flying, just doing a little maintenance before we take off for Ames,” Dentlingter says. “Anybody that has Vietnam-era military people, if you want to bring them out so they can see that helicopter again, feel free.”

The cost for a ride is $80 per person. “We are filling up so I would like people to definitely be jumping online and booking your tickets as soon as possible,” he says, “or, coming out and just telling us, ‘Hey, we want to sign up for the Huey. What do we have to do?'”

Spots are limited for the three local events which will be held in Arcadia on Saturday and Sunday, in Carroll on September 6th and 7th, and then in Ames on the 9th through the 12th. On September 11th, there will be a flyover during the Iowa-Iowa State football game by the Huey and a few Iowa National Guard Blackhawk helicopters.