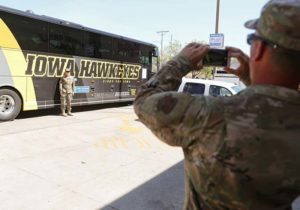 The Iowa Soybean Association and the Iowa Biodiesel Board are partnering with Windstar, the bus company that provides transportation for the Iowa Hawkeyes and Iowa State Cyclones. Iowa Biodiesel Board executive director Grant Kimberley says the buses run on biodiesel and it says so in big letters down the side.

“These buses transport these teams to home games to the stadium and away games, as well,” Kimberley says. “It’s not just for football season, it’s also utilized at other times of the year for some of the other sports teams. These buses get some miles on them and they go all across the country.” He says the partnership and the rebranding of the buses is a great way to educate people about biodiesel.

“We can reach a wide audience this way,” Kimberley says. “People that may not normally see a lot about agriculture or about biofuels. It’s a way to get a good cross-section of people.” The Hawkeye and Cyclone team buses have a broad reach, all the while

advertising one of Iowa’s biggest biofuels.

“People told me that they’ve seen these buses in places like Los Angeles and Denver and even driving by the Capitol in Washington D.C.,” Kimberley says. “They do get around a lot of different places and that’s why we think it’s a great partnership with the university.”

Iowa’s farmers are expected to harvest more than 525 million bushels of soybeans this fall. Every bushel will enhance Iowa’s standing as the nation’s top producer of biodiesel.