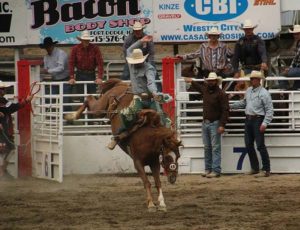 Rodeo fans will flock to the west-central Iowa town of Dayton for a Labor Day weekend tradition starting tonight.

“We’ll have four big performances every day, Friday, Saturday, Sunday at 7 and Monday at 1:30,” Bills says. “We’ve got the parade on Monday at 10 o’clock. This year we have Gizmo McCracken with us as the rodeo entertainer and also Cowboy Kenny Bartrom, he’s going to be doing his motorcycle flips and tricks.”

Bills says the rodeo’s origin story dates back to the days when Franklin D. Roosevelt was president.  “It started in 1937 with three friends. They decided, ‘Hey, let’s have a rodeo in Dayton,’ and ever since then, it’s been an annual event on Labor Day weekend,” Bills says. “It’s grown into four shows and it’s a pro rodeo now and it just keeps getting bigger and better every year.”

The Dayton Rodeo attracts competitors from all over the U.S., Canada, and Australia. There will be fireworks following the shows on Friday through Sunday nights.