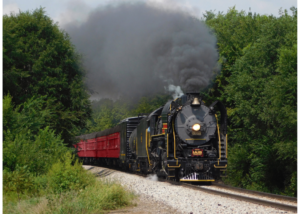 An authentic steam locomotive will chug into downtown Des Moines this morning, pulling several century-old passenger cars that will soon be filled with kids, parents and grandparents who love old trains.

Ellen Lawson, spokeswoman for the Central Iowa Steam Preservation Association, says the QJ-class “Iowa Bolt” locomotive will be making several trips that begin and end at the Science Center of Iowa.

“Each ride is about 50 minutes so we’ll be leaving from the Science Center and taking our guests through the Iowa countryside,” Lawson says. “It’s very much a throwback to the 1950s and before then in terms of how the cars are designed.”

The line of passenger cars includes a few with First Class accommodations, which she says will provide a wonderfully elegant ride. “For those in our coach cars, they have been newly painted and restored back to their glory from when the cars were built around the early 1900s,” Lawson says, “so riders will be able to experience what it was like traveling by rail back in the glory days of steam.”

Each train ride can handle up to 350 passengers and four trips are planned on this Labor Day, starting at 9 AM, with the last one departing at 1:30 PM.

“It’s really important that people understand and know what steam was like back in those days,” Lawson says. “It was how people started to really expand in the United States. Rail travel, in particular, allowed passengers to move outside of cities.”

Steam locomotives were vital in connecting and shaping our nation, Lawson says, calling them one of the greatest industrial advancements. The rare locomotive, known as Iowa Bolt Number 6988, was manufactured in China and brought to the U.S. in 2006.

“The Chinese used steam actually a lot longer than in the United States did,” Larson says, “so as a fireman myself, it is interesting to be in the cab of 6988 because you can tell some of the things the Chinese added on later in time to make it a more convenient operating experience for those in the cab.”

Tickets cost $12 per person while kids under 2 are free. Make reservations online at: www.sciowa.org/steamengine