You are here: Home / Fires/Accidents/Disasters / Sioux City takes in hurricane dogs and cats from Louisiana 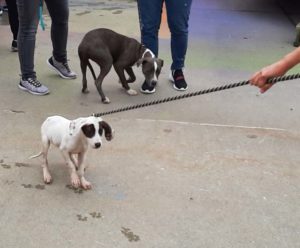 Several dogs and cats displaced by Hurricane Ida have been brought to the Siouxland Humane Society in Sioux City.

Spokesperson Kelly Erie says there are nine dogs and six cats. She says the animals were at a Louisiana shelter and were waiting for new homes when the loss of power and water forced their evacuation.

The pets came to Iowa through “Operation Sunflower” after flying into Sioux Falls and being brought to Sioux City in a van. It’s not the first time the organization has helped.
“We’ve helped out Louisiana I want to say three times. The most devastating one was Hurricane Katrina. We helped out with the last one (hurricane) and also the Texas flooding,” she says.

The cats and dogs will be ready for adoption after a few days. “They’ve had their first set of vaccinations, deworming, they are all ready to go. We’re just giving them a couple of days so we can place them under observation and make sure everything is doing well,” Erie says.

You can adopt one of the animals from the Siouxland Humane Society — or make a donation to go toward their care.