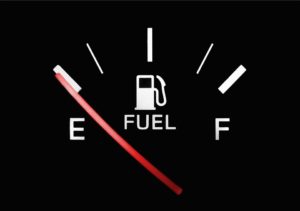 Many newer cars have a display on the dashboard that estimates how many miles you can drive before you run out of gas, but a new study finds those gadgets aren’t always accurate.

“For the most part, they work, it’s a good average,” Mitts says. “Overall, they are fairly accurate, but as you’re getting towards those lower amounts of gas in your gas tank, if you’re relying on it for the exact mileage to that next exit and to that gas pump, you could be in some trouble if you’re taking it that literally.”

The report finds some vehicles underestimate the miles-to-empty, but others overestimate, which can leave you stranded if you rely too heavily on it. The best bet, Mitts says, is to keep an eye on the trusty red needle that swings from F for Full down to E for Empty.

“Really, the most accurate one is where your fuel gauge, the lever, is and you should be watching that,” Mitts says. “As you get closer to the quarter tank of gas during the summer, that’s about the time you should think about filling up.”

During the wintertime, she suggests filling up even sooner, whenever you reach a half-tank.

“You never know what’s going to happen ahead of you,” Mitts says. “There could be an accident on the road, there could be a detour, maybe the gas station’s out of gas, all sorts of things can be happening here and when you reach that point, that’s when you should fill up.”

The study found the reliability of in-vehicle fuel systems varied significantly based on changes in speed, acceleration and distance. Read the full report here.