You are here: Home / News / ISU professor designs spaces for those with disabilities 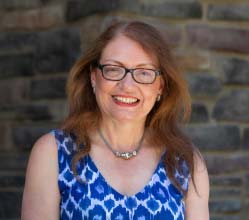 A professor of interior design at Iowa State University is doing research on designing spaces for people with disabilities, especially for those with autism.

As an interior designer in her native England, Julie Irish worked on a range of projects for educational buildings, libraries, airports, chapels, and historical landmarks, but one assignment gave her pause. “I was asked to design a school in Cardiff for children with severe disabilities and autism,” Irish says, “but there was still at the back of my mind that there’s not really research to help me design for people with autism.”

That realization inspired Irish to devote her time toward interior designs that were both elegant and ergonomic, and importantly, accessible to all. “It’s kind of like the perspective that people aren’t disabled, they’re disabled by the environment,” Irish says, “and that’s where my interior design focused then.” Early on, Irish wanted to be a veterinarian, but struggled in science. She loved drawing and crafting, though, which led her to the design field. She earned a degree in interior design, followed by a master’s degree in inclusive design.

Irish says that degree helped her to understand how the environment affects people, and how she as a designer could improve.
“The number of people with disabilities is growing and I think perhaps we haven’t quite caught up,” Irish says, “just the idea of making what we design better for people.” Irish is in her third year of teaching at ISU. She leads a faculty learning community called Autism Links, which gathers faculty from various departments to share research surrounding autism. While her focus now is on people with disabilities, she’s also had clients who are royalty.

“My claim to fame is that I designed a restroom in Cardiff Castle for Her Majesty the Queen,” Irish says, laughing. “I don’t know if she ever used it but I like to think she did.” In the spring of 2022, Irish and her ISU colleagues will lead a design studio to look at the former Veterans Affairs Hospital site in Waterloo to see how it could be redesigned.