You are here: Home / News / Vigil in Oskaloosa town square to honor 9/11 victims 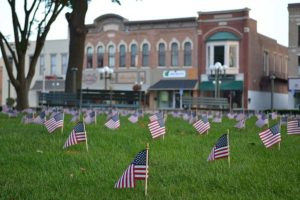 Volunteers will stage a 72-hour vigil in downtown Oskaloosa to honor the victims of 9/11. It starts at 5 p.m. today, with one American flag in the town square for each of the 2996 people killed in the attacks.

One of those flags will be in honor of Frank Kminek’s sister.

“My sister, Mari-Rae Sopper, was on Flight 77 that crashed into the Pentagon. She was living in Washington, DC at the time. She was actually moving to California,” he says. “She had just accepted the job at UC-Santa Barbara as head coach of women’s gymnastics. She was on the flight that day.”

Sopper was also a member of Iowa State University’s gymnastics team from 1985 through 1988. Her brother Kminek, who is from Oskaloosa, is one of the volunteers who’ve organized this weekend’s vigil on the 20th anniversary of 9/11. It will feature large flags an Oskaloosa company flew over Ground Zero in the weeks after the attacks.

“Musco Lighting was asked to provide recovery service lighting for the Pentagon site and for the World Trade Center in New York,” he says. “…Musco also flew American flags from the masts of their trucks during those events and we will have one of those flags flying over the (Oskaloosa town) square this weekend.”

Musco trucks with mobile lighting arrived at the World Trade Center site at dawn on September 12. One Musco truck at the Pentagon was later moved to New York and didn’t leave what became known as Ground Zero until May of 2022.

“We have the unique opportunity to share some images and some remembrances of Musco people who were involved in that,” Kminik says. The vigil in Oskaloosa’s town square that starts late this afternoon will end at 5 p.m. Sunday.