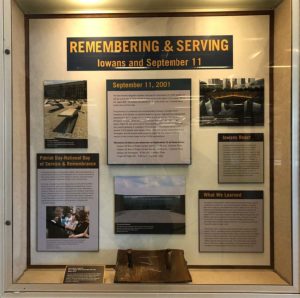 The State Historical Society of Iowa will mark the 20th anniversary of the 9/11 attacks with a bell-ringing ceremony outside the State Capitol in Des Moines Saturday.

Historical Society state curator Leo Landis, says they will use the five-five-five bell ringing protocol that’s used to firefighters who died in service. “We’ll start Saturday morning at 7:46 with bell tolling — Iowa time 7:46 is when the first attack occurred on the north tower in New York City. We’ll have a public program at 8:45 if anyone wants to join us,” he says.

The State Historical Museum of Iowa has a display that commemorates those who died during the attacks. The display also honors the service of Iowa City firefighter Glenn Pauley, who had befriended members of Rescue Company 4 of Queens in 1999.
“When the attacks occurred, he was able to get some time off from his supervisor, and along with another firefighter they drove to New York City and worked three days in rescue and recovery. Glenn again, knew men in Rescue Company Number Four and was able to assist on the site,” Landis says.

Landis says they have the equipment on display that Pauley was given by the New York firefighters after he helped them. “When he came back he stored it for a number of years and then donated it to the State Historical Museum a couple of years ago,” according to Landis. “And we wanted to tell his story — but also remind Iowans that there are firefighters all across the state doing great work as well here, so timing it to the attacks of September 11th, but also honoring the service of all first responders.”

Landis says the day was one of sorrow and anger for many — and he says it is important to highlight the people who worked throughout that. “Our wish at the Historical Society is to tell stories of overcoming tragedy. And Patriot Day — which is what September 11th is now — is a day of remembrance and service,” he says. “We wanted to share the story of September 11th with the people who weren’t alive at the time, or who were too young to remember the attack.”

The State Historical Museum of Iowa will be open from 10 to 11 a.m. Saturday so you can see the commemorative displays. The September 11th materials will remain on display through the end of the year. The museum is regularly open from 9 a.m. to 4:30 p.m. Tuesday through Friday, and you can find out more at iowaculture.gov.