The owner of a western Iowa welding and metal fabricating company is hosting a weekend event to mark the 20th anniversary of the 9/11 attacks. 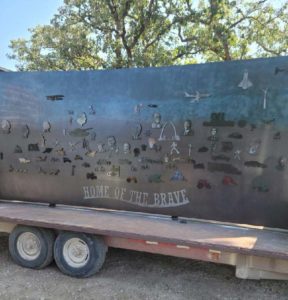 Metalworks photo of “We the People” wall.

Duane Weirich, who owns Weirich Welding Plus in Lewis, says he’s created an eight-by-20-foot custom metal “We the People” wall of American history, with individual cut-out pieces that are being bolted on. “All the way from George Washington up to our current people on the wall,” Weirich says. “There’s history of agriculture, history of transportation. There’s sports and entertainment icons on there, presidents, and on top is a bald eagle holding a bronze cutout of the preamble to the Constitution.”

There are 91 separate pieces that make up the characters on the wall. “I started on the project back in January to make a wall of history with an American eagle on it to take to an art show in Grand Rapids, Michigan, the same place I took an eagle five years ago,” Weirich says. “This is like a lot of projects that I’ve worked on, it keeps growing. It starts out small and gets bigger and bigger.”

The wall will be on display at Weirich Welding in Lewis on Saturday for an event that includes a free light lunch for first responders, law enforcement, and veterans. On Sunday, Weirich will haul the 5,000-pound patriotic wall to Michigan for a competition. 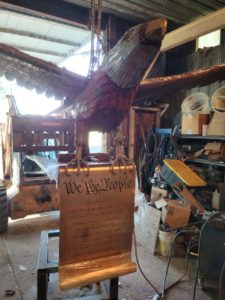 “It’s the world’s largest art contest. The first year I was up there, five years ago, there were 1,500 entries,” Weirich says. “One thing I’m really excited about is, I got an email from the Gerald Ford Presidential Museum and they wanted this project there. I was pretty tickled because that’s the best place to be in Grand Rapids.”

The wall will be one of the largest objects on display there. After a vote, he plans to sell it through an online auction.