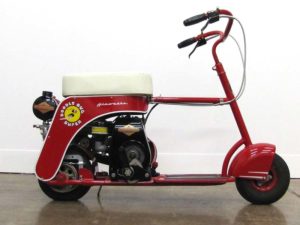 Webster City is being invaded by Doodle Bugs starting today. They’re not insects, but four-foot-long motorized scooters that were popular in the late 1940s.

A reunion for scooter owners will run through Saturday at the Hamilton County Fairgrounds. Organizer Jerry Wells of Webster City says the little machines saw drastic price jumps over just a few years — and are very rare and extremely valuable now.

“They made them in four production runs of about 10,000 each,” Wells says. “Of that first production run, there were about 750 of them that had Clinton engines, so they’re pretty rare. I don’t know how many bikes there are totally. One of our members estimated, there may be 1,000 of them in existence out of that 40,000.”

Wells says Doodle Bug scooters have been found in such far-flung parts of the globe as Brazil and the Netherlands. “It seems like every day we see on Facebook, somebody has found one in a junk pile,” Wells says. “They bring it back in a year and it looks like it was resurrected.”

The original scooters had one-and-a-half horsepower engines and ran around 23 miles an hour top speed. As part of the 35th annual reunion, collectors will be riding their scooters around Webster City this week, with the help of the police department