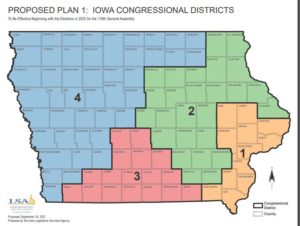 Plan 1 for Iowa redistricting has been released. It shows none of the four incumbent U.S. House members from Iowa living in the same reconfigured district.

District lines are redrawn every 10 years, after the Census, to account for population changes. Congresswoman Ashley Hinson of Marion, a Republican, lives in the proposed first congressional district, which would cover a dozen counties. The cities in Cedar Rapids, Iowa City, Davenport, Burlington and Fort Madison would be in that first district.

The proposed third district, where Democratic Congresswoman Cindy Axne of West Des Moines lives, covers 17 counties. It stretches from the Des Moines metro to the Missouri border, including the cities of Bloomfield on the east and Clarinda on the west.

Congressman Randy Feenstra of Hull, a Republican, lives in the proposed fourth district. It covers 44 counties and includes the cities of Council Bluffs, Sioux City, Mason City, Fort Dodge and Sidney in the southwest corner.

State legislators are pouring over the newly configured Iowa House and Senate districts to see if they’re paired with another incumbent.

“Kind of like a kid with Christmas. You don’t know what you’re going to get,” House Speaker Pat Grassley, a Republican from New Hartford, told Radio Iowa shortly before the maps were released.

In the 2011 redistricting plan, Grassley and another Republican in the Iowa House were thrown into the same district. Grassley is offering this advice to his fellow House Republicans.

“Everybody needs to take a look at the map, take a deep breath, make sure you don’t overreact,” Grassley said. “At the end of the day, we’re all still Republicans and as a Caucus, we want to be successful, so take a step back and take some time to evaluate it.”

See the maps for state legislative and congressional districts here.

Population data from the Census Bureau was delivered to states late, in August, and it was impossible for Iowa lawmakers to meet the September 15 deadline set in the Iowa Constitution for completing this process. The Iowa Supreme Court, which is now technically responsible for reapportionment, this week made clear it will allow the legislature to use the process it normally does for redistricting — but the Chief Justice announced December 1 is the deadline for getting a plan in place. The governor issued a proclamation to convene the legislature in special session October 5. The House speaker said the goal is move as quickly as possible to a vote on the plan.

“Obviously we want to get this done as quickly as possible with some of the deadlines that are looming,” Grassley said.

The top Republican in the Senate issued a written statement earlier this week about redistricting. Senate Majority Leader Jack Whitver of Ankeny said Iowa has a “nationally recognized” redistricting process and the goal of Senate Republicans is to follow it, just as lawmakers have since 1981.