You are here: Home / News / Today’s the day Iowa redistricting ‘Plan 1’ is released 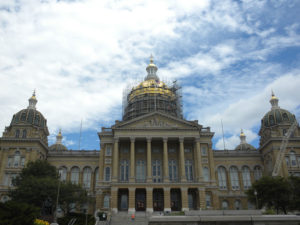 The big reveal happens later this morning at the Iowa Capitol, as the plan for redrawing congressional and legislative district boundaries gets delivered to lawmakers and released to the public.

Reapportionment happens every 10 years to adjust for changes in Iowa’s population, so some incumbent legislators may be thrown into the same House or Senate district with another incumbent as boundaries change. At 10 a.m., the Legislative Services Agency will deliver paper copies of what’s called Plan 1 to the House and Senate. The maps will be posted on the legislature’s website shortly after that.

The first set of maps presented to the Iowa House and Senate back in 2011 quickly won approval from all but 10 of the legislature’s 150 members. Jack Kibbie, a Democrat from Emmetsburg, was president of the Iowa Senate a decade ago.

“This plan treats Democrats and Republicans, I say, equally,” Kibbie said just before the Iowa Senate voted back in 2011 to approve the maps that are in use today.

Republican Terry Branstad, who was governor at the time, signed the plan into law. “Nothing is perfect, but I think they did a very good job,” said Branstad, who approved redistricting plans in 2001 and 1991.

The plan Iowa lawmakers approved in 2011 threw 14 state senators and 27 state representatives into districts with other incumbents. Kraig Paulsen was Speaker of the Iowa House at the time. He offered few clues to how his colleagues were reacting in private as they reviewed the maps for the first time.

“It is what it is,” Paulsen told reporters.

Mike Gronstal of Council Bluffs, who was the Senate Majority Leader in 2011, cautioned against quick rejection of Plan 1.

“It behooves everybody to take a cold hard look and maybe a hard swallow and go, ‘But maybe overall it’s fair,'” Gronstal said on March 31, 2011.

Fifteen days after getting Plan 1, the 2011 Iowa legislature approved the plan and it was signed into law. As a result of the 2010 Census, Iowa lost one of its seats in the U.S. House, so that 2011 redistricting plan carved up Iowa into four congressional districts and paired two incumbent congressmen in the fourth district and two in the first district. Then-Congressmen Tom Latham and Dave Loebsack both wound up moving into another district rather than run against a colleague from the same political party in 2012.