You are here: Home / News / Large car collection goes up for auction in Hamilton County 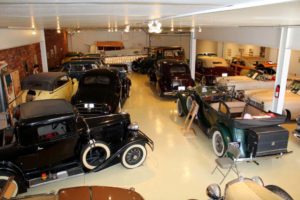 Cars in the Hempken collection will be auctioned off.

If you always wanted to own a 1933 Rolls Royce or maybe a ’69 Corvette, the Hamilton County town of Williams is the place to be today.

An auction of over 60 cars, some from over 100 years ago all the way into the 1960s, will be featured from the Hemken Car Museum. The museum opened in Williams 20 years ago and operated by Daryl and Ann Hemken.

Daryl died in 2005 and Ann Hemken continue to operate the museum after her husband’s death until it closed in 2018. Ann Hemken died last year. The auction will be conducted by Rich Penn Auctions of Waterloo. Penn says it’s an amazing collection.
“Daryl Hemken had a very sensitive taste for what he called orphan cars,” Penn says. “If it was made in the 1940s and it was a convertible and it wasn’t a Chevrolet or a Ford or one of the popular brands, and especially if it was a Packard, he liked it.”

The array of vehicles is vast. “There’s Studebakers and there’s Hudsons and there’s DeSotos and there’s Packards, there’s Model As and Model T Fords,” Penn says. “There’s a Playboy car which is a little bitty car which they only made about 60 of.” The total haul from the auction is sure to be a princely sum and it’s all going to one place.

“The family trust that collected and maintained these is gifting the proceeds to McPherson College in McPherson, Kansas,” Penn says, “which is the only college in the U.S. that has a four year bachelor’s degree in auto restoration.” The auction will begin at 9:00 a.m. both today and Saturday mornings in Williams.

Learn more about the auction at richpennauctions.com.