You are here: Home / News / 26 GOP governors, including Iowa’s, seek meeting with Biden on border security 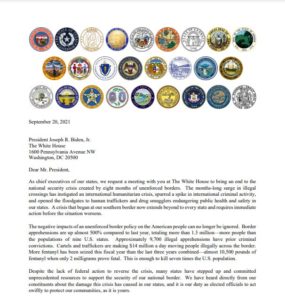 Letter asking for a meeting on the border crisis.

Governor Kim Reynolds and 25 other Republican governors are asking to meet with President Biden to discuss security at the U.S.-Mexico border.

Reynolds says Biden Administration policies have led to a border crisis and the federal government has a duty to solve it.

Iowa Senate Democratic Leader Zach Wahls of Coralville says if there is a White House meeting, he hopes Reynolds uses the opportunity to ask for the $95 million in federal school safety funding she refused earlier this year.

The governor of Vermont was the only Republican governor in the country who did not sign the letter.