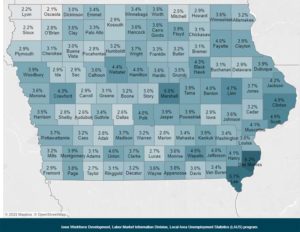 The unemployment rate for August held steady at 4.1% and a spokesperson for Iowa Workforce Development says they anticipate the rate falling in the next couple of months.

IWD Deputy Director Ryan West says things usually pick up in October and November as companies try to get things done before winter. “Iowa’s tied for 17th with Indiana as far as the unemployment rate — but we are seeing a lot of good things. The rate staying the same is obviously better than it going up, and we are excited where we are going to be in the next few months,” West says.

The number of people entering the workforce again had been steadily increasing — but made a slight drop in August. West says that can be attributed to one group in particular. “We had 1,300 people who left the workforce this last month. A large group of those folks appeared to be male — and a lot of them look to have retired over the age of 65,” according to West.

He says a lot of them are Baby Boomers who have retired — and there are still questions about why they’ve left the workforce now.
“We weren’t really sure if a lot of them decided to retire, perhaps could have retired pre-COVID, but after COVID hit decided to say “You know what, I’m done for now,” West says. “Again, we still need a few more months to see where that ends up.”

He says there is a chance some of them may reconsider. “That Baby Boomer group makes up such a big part of the workforce, a lot of experience. Hopefully, we can attract some of those individuals back into the workforce at some point,” West says. The labor force participation rate declined by a tenth of a percent to 66.8% in August.