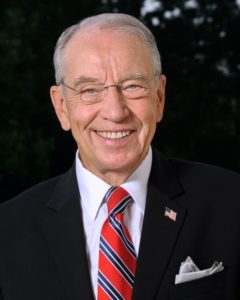 Republican U.S. Senator Chuck Grassley is criticizing Democrats in Congress and in the White House for what he says is a worsening “crisis” at the southern U.S. border.

Grassley says the escalating troubles are driven by “lax enforcement policies” as well as the administration granting “sweeping amnesty” for undocumented immigrants and others. “If we don’t enforce our laws, it’s just natural that people are going to come here,” Grassley says. “In a sense, the activity of our own government is pulling people to violate our rules by entering the country without following the procedures.”

Grassley says Democrats are to blame for making border security a political issue, which he says it’s not. “The current situation is prompting serious humanitarian concerns, overwhelming border communities and presenting unknown pandemic risks,” Grassley says, “because about 15% of the people test positive so they become spreaders of the disease.”

On another border issue, Grassley says he supports President Biden’s move to end a travel ban of almost two years by allowing Europeans who’ve been fully vaccinated to visit the U.S. starting in November. “If it’s based on science,” Grassley says, “and I think we’ve been more cautious with Europeans coming to the United States than Europeans have been to have Americans go over there, and I think reciprocity would dictate an answer.”

The new policy allows visits to the U.S. by vaccinated travelers from the 26 European nations as well as several other countries, including China, Iran, Brazil, and South Africa.