You are here: Home / Human Interest / Preview out for movie about Kurt Warner’s improbable rise 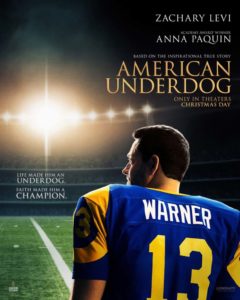 The movie trailer is now out for “American Underdog, The Kurt Warner Story,” and it promises to be a wintertime blockbuster — at least here in the Hawkeye State.

The film stars Zachary Levi in the title role about the Burlington native who played high school football in Cedar Rapids, then at the University of Northern Iowa.

Audiences in Iowa will see plenty of familiar images, including Levi as the younger Warner stocking shelves at Hy-Vee, running rural roads beside frozen cornfields, and donning the UNI Panthers and Iowa Barnstormers uniforms.

Warner overcame a host of setbacks and challenges to eventually become a two-time NFL MVP, a Super Bowl champion, and Hall of Fame quarterback.

American Underdog is due on the big screen on December 25th.