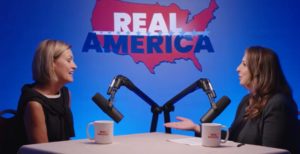 Reynolds discussed the new law in a just-released podcast hosted by Republican National Committee chairwoman Ronna Romney McDaniel. “As a mom, you want to know that your kids are being raised in safe communities,” Reynolds said. “As a business, do you want to come invest in a community or in state where you don’t know if tomorrow they’re going to come riot and loot and burn your business down?”

The podcast was recorded on August 28, just as Iowa schools were opening for the fall semester. The pair blasted states where last spring’s standardized tests for students were delayed until this fall.

“A lot of states aren’t doing assessments,” Reynolds said. “…They don’t want to know the damage that they’ve done to these kids.”

McDaniel interjected: “They don’t want to be graded on what they’ve done.”

Reynolds concluded with: “They don’t want to be responsible or held accountable.”

Federal law requires states to test students each year to gauge progress in reading, math and other skills. Earlier this month, Florida’s Republican governor announced he will end that kind of standardized testing after this school year and replace it with shorter tests.

“I don’t know the health of students. We don’t what’s going on in that family…The other thing is there’s no data. I am so tired of people talking about data and there really isn’t,” Reynolds said, adding: “Be honest.”

Reynolds interjected: “And they changed that!”

Iowa Democratic Party chairman Ross Wilburn issued a written statement, saying wearing a mask indoors prevents the spread of Covid and Reynolds is “wasting her days” and the tax dollars of Iowans “by going on partisan talk shows to spout dangerous disinformation” about a “deadly virus.”

The Iowa Department of Public Health’s website listing confirmed Covid cases will be updated later today. Last Wednesday’s report found 29% of Iowans who had tested positive for Covid in the previous seven days were under the age of 18.