You are here: Home / News / Remains of Iowa sailor killed at Pearl Harbor return to Exira 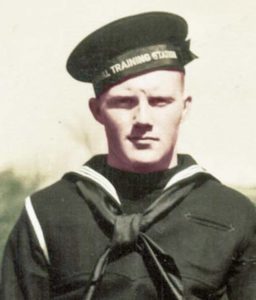 The funeral for a western Iowa man who died “on a date which will live in infamy,” will be held tomorrow in Audubon County.

Eli Olsen, of Exira, was a 23-year-old Navy Petty Officer 3rd Class and a storekeeper onboard the USS Oklahoma, when it was sunk and rolled over on December 7th, 1941 during the Japanese attack Pearl Harbor, in Hawaii. According to the U.S. Navy, 388 of the 429 sailors were recovered from the ship off Ford Island. Of those, 35 were initially identified.

The rest were interred as “unknowns,” in two separate Hawaiian cemeteries. An effort to identify the remains began in 2015 through DNA analysis. Olsen’s identity was confirmed in September of 2017. They were transported from Omaha to Audubon on Tuesday.

As the entourage escorting him home was on its way to the funeral home, area residents lined Highway 71 and in communities along the way, to show their support. Just outside of Brayton, there was a John Deere combine with its spout out and an American flag.

Services for Petty Officer Olsen will take place 10:30 a.m. Saturday at the Exira Lutheran Church. Interment will be in the Exira Cemetery in Exira. Casket bearers will be from the United States Navy. The family invites everyone to the Exira American Legion Park for a luncheon following the committal service. Some seating will be available but everyone is encouraged to bring their own chairs.