You are here: Home / News / Reynolds urging Republicans to focus on 2021 elections 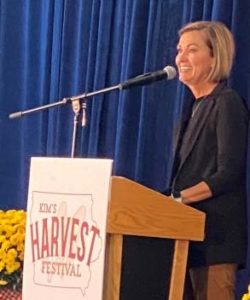 Governor Kim Reynolds is urging her fellow Republicans to vote in the upcoming city council and school board elections.

“Please, please, please don’t forget about the elections this November,” Reynolds said Saturday night at a fundraiser for her re-election campaign.

“This pandemic has taught us many things and one of which is we cannot neglect our local races and so let’s all come together and treat this November like next November. Find out where your local school board and city council candidates stand on the issues that you care about and then go vote…When we show up, we win.”

In August, Reynolds endorsed a school board candidate in Ankeny who’s a vocal critic of the district’s requirement that students wear face coverings. Reynolds did not directly mention the legal fight over mask mandates, but spoke in general about supporting parental choice.

Reynolds announced the final accounting cross-checks are done on the state fiscal year 2021, which ended June 30.

“We will close last year’s books with a record surplus of $1.24 billion,” Reynolds said. “…This is your money, not the governments and I won’t forget that. Republicans in the legislature won’t forget that, which is why we will continue to cut taxes in Iowa.”

The state also has $1 billion in its cash reserve and trust fund.