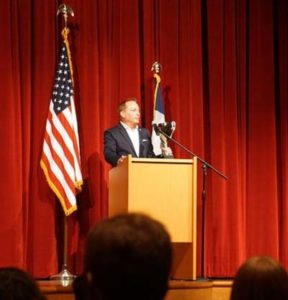 This is National Voter Registration Day and Iowa Secretary of State Paul Pate says it’s sort of like celebrating a loved one’s birthday.

Pate began the day at a central Iowa high school to emphasize the annual awards his office gives to districts where at least 90 percent of eligible students are registered to vote. “Since we started the Carrie Chapman Catt awards we’ve registered over 6500 young people, I think, through that initiative alone across the state,” Pate says.

Carrie Chapman Catt of Charles City was a leader in the national movement that led to the passage of the 19th Amendment which gave women the right to vote. Last year, 22 Iowa school districts received an award for having at least 90 percent of eligible students registered to vote. Iowa law now allows 17 year olds to register to vote if they will turn 18 on or before the date of the General Election.

“If they’re going to be 18 by November, particularly for the next election, the (2022) midterms, they’ll be eligible to vote in primaries,” Pate says. “I think that’s a big change and most of them think you have to be 18 and we want to make sure they know, ‘No, you can vote in the primary,’ because, frankly, there’s where you have more choices.”

A record number of Iowans are currently registered to vote. Earlier this week, Pate’s office sent postcards to eligible voters who are not registered to vote. It’s a partnership between the Election Registration Center and Pate’s office. Pate says the mailing went to about 50,000 Iowans who were shown through a check of driver’s license records to be eligible Iowa voters, but not among those who are registered.

“Now, the last one we did was about 80,000, so clearly we are making progress in registering voters and Iowa is one of the top states in the country when it comes to voter registration,” Pate says. “I’m proud of Iowans. They get it. They know voting’s important.”

Voters in one small town in northwest Iowa are casting ballots on this National Voter Registration Day. There’s a special election in the City of Rolfe, to fill five vacancies on the city council. Due to those vacancies, the council has not had a quorum since August.