You are here: Home / News / Field of Dreams site near Dyersville sold 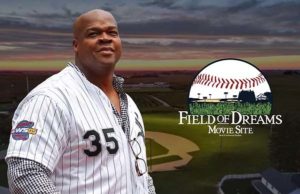 Iowa’s most famous baseball field is getting a new owner.

A group lead by Baseball Hall of Famer Frank Thomas announced today it has purchased a controlling interest in the Field of Dreams Movie Site near Dyersville. That group has also purchased the field built near the movie site where the first Major League Baseball game played in Iowa took place in August.

The successful game was followed by the announcement that another will follow next year. The terms of the sale were not revealed.