You are here: Home / News / ISU professor says this is interim period for electric vehicles 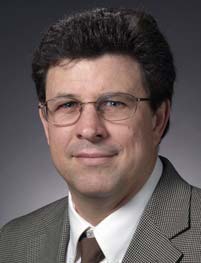 A professor in Iowa State University’s electrical and computer engineer department predicts the benefits of an electrified transportation system will be evident 20 years from now.

Jim McCalley has done research on transmission planning, power systems, and wind energy. “One of the major motivations for wind and solar, of course, are decarbonization,” he says. “That’s what gives a lot of attention to that effort, but it’s also economic.”

This week, the Ford Motor Company announced it will build four new factories in the next four years — three to make batteries for electric vehicles and one to make electric trucks. As Ford and other auto-makers shift to making more electric vehicles, it will put an additional load on the power grid.

“We need to be prepared for that,” McCalley says.

According to McCalley, the utility companies serving Iowa have done a good job maintaining the generation, transmission and distribution of electricity, but more must be done to make the system resilient.

“We had the derecho that caused a lot of interruptions and that was really a result of an extreme event. We saw something similar happen in Texas and of course we have been watching the wildfires in California,” he says, “and so the ability of the electric infrastructure to be resilient to these kind of very, what used to be very rare events, and now may not be so rare is gaining in importance.”

According to the U.S. Department of Energy, there are more than 500 ports in Iowa where electric vehicles can be charged. McCalley says that makes hybrid models that switch to petroleum-based fuel when the battery runs low attractive.

“The interim time period that we’re in right now we’ll probably see a lot of purchase of vehicles that are fueled by gasoline…as well as electricity,” he says.

McCalley made his comments during a recent episode of “Iowa Press” on Iowa PBS.