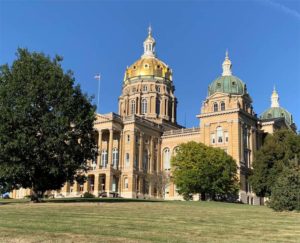 The Iowa Department of Revenue and other state agencies are getting closer to unveiling a new online portal where you can conduct business with them.

“In the initial rollout which happens in mid-November, business owners can go on, they can register for a sale tax permit, they can obtain a license to sell alcohol,” according to Fuller, “it’s kind of a one-stop-shop to make it easier for them to do business in the state.” He says the website will be a place to get the process started and the state agencies will still have to do the follow-up — but it means the businesses won’t have to go to five different places to do five different things.

Iowa Lottery CEO, Matt Strawn talked about the pending rollout with the Lottery Board at their meeting. He says he looks forward to replacing the paper system they now use. “I am very excited from a staff perspective with the hours it will save our staff who previously had to not only mail out and receive these applications and manually enter all the information on those,” Strawn says.

Fuller says this has been a four-year project, and the first rollout is a starting point for bigger things ahead. “That bigger project is to make filing and paying taxes and other business that people need to do in the state a little bit easier,” he says. “So, later down the road people can go to one place and file and pay their taxes, they can look at the correspondence with the department if there is any. So, this is just the beginning.”

The rollout of the first services is slated for November 15th.