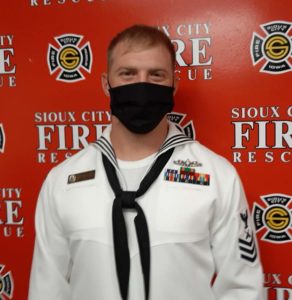 A group of sailors from the U.S.S. Sioux City are making their first visit to their ship’s namesake for the annual chamber dinner.

“We go through and we build a package to explain a little bit about what we’ve done, who we’ve done it with, and how we’ve performed,” he explains. He says they then go before a board and are asked questions and then  theyare graded on the package they put together. Parrish has been on the ship since 2017.

The quartet of sailors toured city hall and were honored today at a reception at police and fire headquarters.