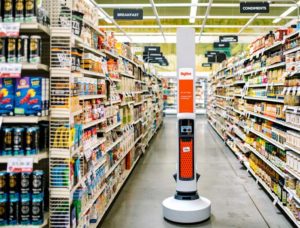 Hy-Vee has begun testing robots named “Tally” that roll through the aisles taking inventory and reporting where shelves have been emptied.

“The robot is able to scan all of our tens of thousands of products multiple times a day and provide a store team immediate feedback on out-of-stock (items),” says Christina Gayman, an assistant vice president for the grocery store chain.

Five robots have been deployed. They are at stores in the Des Moines suburbs of Ankeny and Altoona as well as Hy-Vee stores in Omaha and Lincoln, Nebraska and Lee’s Summit, Missouri.

“We actually haven’t had, you know, any negative response to it,” Gayman says. “It has little eyes that blink. It’s very slim. It makes a little bit of noise if it gets close to a customer….so it doesn’t sneak up on them essentially…It will wait its turn.”

The robots are programmed to return to a docking station to recharge after every pass through the store. Gayman says within a couple of months, they’ll have an idea of how much faster the stores get empty shelves restocked.

“Typically, we have had employees who have to go manually check…or maybe a customer would bring it to our attention during a really busy sale weekend: ‘You’re out of stock on this,'” Gayman says. 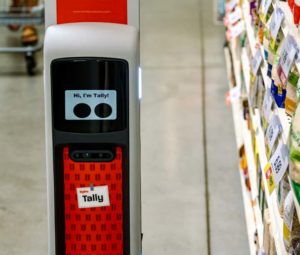 The robot “knows” what products are available in the back of the store to restock shelves, according to Gayman, and staff are quickly directed by a new software program to where those products are located and where they need to go.

“If you have something that’s truly out of stock and needs to be reordered, we’re also finding that out quicker as well,” Gayman says.

As for whether these robots will replace Hy-Vee’s human employees, Gayman says the goal is to have workers taking stock of what’s missing or misplaced on the shelves and focus them entirely on customer service. She says Hy-Vee employees currently assigned to do inventory are also there to help customers find products in the store.