You are here: Home / News / September rainfall well below average 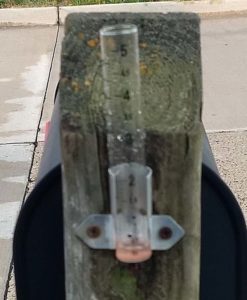 September ended with scattered showers across the state — but State Climatologist Justin Glisan says the preliminary numbers show those showers were scarce much of the month.

“What we’re looking at is about one-point-six-five inches right now — and that’s a little over one-point-eight inches below average. So, a pretty dry month,” Glisan says. He says it won’t be in the top ten for dryness — but will make that next tier.

“This will be one of the top 20 driest Septembers on record. If we look at central and north-central Iowa, we has some coop stations that have had really dry September — top ten,” he says. The drought monitor for this week shows only about 24 percent of the state is without some sort of dry conditions.

Glisan says the dryness came with some heat as well. “Statewide average temperature was about 67 degrees, and that’s about three degrees above average,” according to Glisan. “So, if we look at the historical rankings going back 149 years — it looks like a top 30th warmest September on the record books.”

Glisan says the indicators are pointing toward the warmth continuing in October — with the possibility of a break in the dry weather. “We are seeing a slight trend in the short-term outlooks to near normal or a slightly elevated shot at wetter conditions in northern Iowa getting out into the first half of October,” he says. “But we are definitely if you are looking at the six to ten, eight to 14 in the final October outlook — a very strong signal for warmer than average temperatures.”

The precipitation potential will be good news for those areas that saw a deficit in September.