Iowa State Patrol spokesman, Sergeant Alex Dinkla, says they used a new technique this morning in central Iowa.
“We had a trooper who was in with a semi driver and we were driving up and down I-80/35 specifically looking for motorists who were using their cellphone or electronic communication device in an inappropriate manner that was unsafe driving up and down the roads,” Dinkla says.

Dinkla says they only used the Trooper and the truck for a few hours, but were busy. “We saw a lot of violations happening. The troopers who were working on that project stayed completely busy. And when you drove up and down the interstate all you saw were troopers pulling people over, “Dinkla says. “We wrote 21 citations in the two hours this morning — and ten of those alone were for texting and driving.” 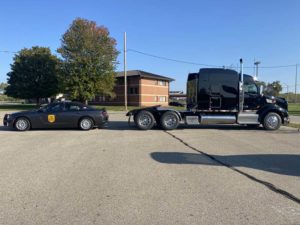 A trooper rode in a semi to find drivers illegally using their cellphone in central Iowa. (ISP photo)

He says texting was one of the top violations, but there were other unsafe things going on as well. “We had a person who was watching a movie going down the road. People have to take responsibility for their own actions — and that’s supposed to be driving — not using a cellphone while driving down the road,” he says.

Dinkla says the number of drivers seen using their phones shows there’s a lot of work left to do. “You know, we preach about it, other people preach about the dangers, you hear about the dangers, but the natural reality is that we still have people doing it all the time and the temptation is still there, Dinkla says. “Until people understand that temptation and can alleviate that temptation — we are going to continue seeing motorists use those cellphones every time they hear that chime for a text message, or they want to go and check their social media.”

The five special enforcements dates were set based on past history of traffic fatalities on the roadways outside of the holiday driving periods. Dinkla says the Fatality Reduction Task Force will be looking at their success.
He says they are going to reevaluate each of the projects and things they may change or add, with the ultimate goal to drive down the fatality rate. “But we cannot do that alone,” he says.

One of the first goals is to have the yearly deaths on Iowa roadways drop below 300. “We’re close and approaching that 300 fatalities for the year, but we still have two-and-a-half months left in the year. If we are going to achieve that first goal of 300 or under — we are going to need the public’s help, we need everybody’s help,” Dinkla says. State roadway deaths were at 256 as of today.