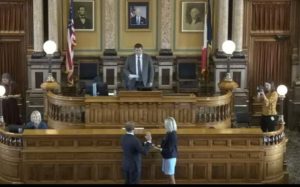 The legislature has a new member as it convenes today to consider a redistricting plan. State Representative Mike Bousselot, a Republican from Ankeny, won a special election last month for an open House seat.

House Speaker Pat Grassley administered the oath of office shortly after the House convened this morning.

Bousselot is an attorney who was an aide to former Governor Terry Branstad and, until August, to current Governor Kim Reynolds. Bousselot now occupies the House seat the late John Landon of Ankeny held from January, 2013 until his death this July. A tree is being planted in Landon’s honor on the northwest corner of the Iowa Capitol lawn.

As is the custom at the legislature, both the House and Senate began with opening prayer.

“Dear Lord, we ask as we begin this special session to consider the redistricting map before us may we be able to look at it with a rational perspective,” Representative Cecil Dolecheck, a Republican from Mount Ayr, prayed. “Help us to put aside our personal desires and lead us down a path that seeks to glorify you.”

A large group of protesters was at the Iowa Capitol earlier today, urging the legislature to ban pandemic-related mandates masks and vaccinations. Speakers from the Informed Choice Iowa group say businesses should be barred from requiring workers get Covid shots. The group also opposes school district masking requirements for students and staff.

Republican legislative leaders have indicated its unlikely anything other than the redistricting plan will be up for a vote today.