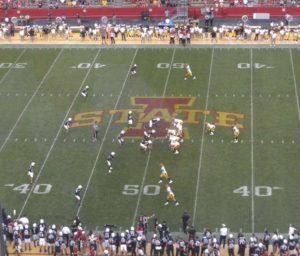 There were more than $210-million dollars bet on sports in Iowa in September.

“September handle numbers were the highest to date. That goes back to when sports betting was legalized,” Racing and Gaming Administrator, Brian Ohorilko says. The 2021 September betting increased by more than 138-million dollars than September of 2020.

Ohorilko says the January law change allowing players to sign up for online sports betting without going to a casino, and the return to a normal schedule of games following the pandemic were a couple of factors. “If people remember last year — September of 2020 — there were a number of leagues that were just kind of finding their way — the PAC-10, Big-12 — it was just a situation where there weren’t as many opportunities,” he says.

There was not an Iowa-Iowa State football game in 2020, and this year’s version featured two top ten teams. Ohorilko says that undoubtedly had an impact. “We don’t have game-specific data — but just anecdotally what you hear from operators is that when the local teams are doing well — it drives additional handle to the books,” according to Ohorilko. “And so it’s more the casual fan base that would like to make a friendly wager and do it legally — they will come out.”

Ohorilko says the massive jump in sports betting from August to September shows the impact of college and NFL football. “In August we had a handle of 108 million. And then to see that handle jump to 210, which is what we saw in September, that was a significant increase,” he says.

The sports betting pace could keep up this month as the baseball playoffs add to the full football schedule. “We see the more serious or more regular player betting baseball throughout the year. But when we get into the playoffs — again that will drive just more interest and more casual fans. We will see some more activity in the baseball markets, and that will help the overall markets,” Ohorilko says.

More than $204.7 million was paid to bettors in September out of the more than $201 million bet. The state will receive around $5.7 million in net receipts from sports gambling for September.