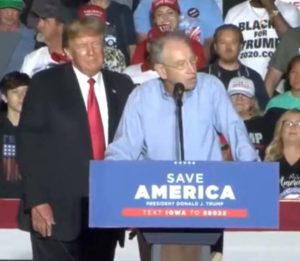 Former President Donald Trump has endorsed Republican Chuck Grassley’s bid for an eighth term in the U.S. Senate. Trump made the announcement this weekend during a rally in Des Moines.

“A great American patriot, a man who truly loves Iowa — loves Iowa,” Trump said. “He fights like none other…When I’ve needed him for help, he was always there.”

Grassley cited the recent Des Moines Register Iowa Poll which found 91% of Iowa Republicans have a favorable view of Trump.

“I was born at night, but not last night, so if I didn’t accept the endorsement of a person that’s got 91 percent of the Republican voters in Iowa, I wouldn’t be too smart,” Grassley said to the crowd after being invited on stage by Trump. “I’m smart enough to accept that endorsement.”

Trump told the large audience gathered on the Iowa State Fairgrounds that some Republicans have urged him to look ahead and stop talking about the 2020 election.

“The single biggest issue, the issue that gets the most pull, the most respect, the biggest cheers is talking about the election fraud of 2020 presidential election,” Trump said, to cheers. “Nobody’s ever seen anything like it.”

In January, Grassley voted to confirm President Biden’s win in the Electoral College and asked Americans to respect the country’s Constitutional system and its new commander-in-chief. On Saturday, Trump spent a good share of his speech listing his complaints about the 2020 election.

“The Justice Department was scared or impotent. They didn’t want to do anything about it,” Trump said. “…Likewise, the Supreme Court refused to hear the case by Texas and almost 20 other states and now their approval rating is the lowest it’s been in memory…I believe it’s for the reason that they refused or didn’t have the courage…to do something about the election.”

The Iowa Democratic Party’s chairman called Trump “toxic” and criticized Republicans for “tying themselves to a man who is undermining the foundations of our democracy.” Former Iowa Congresswoman Abby Finkenauer of Cedar Rapids, one of the Democrats running for a chance to challenge Grassley next year, said by accepting Trump’s endorsement, Grassley has chosen is side with “far right extremists” rather than defend our democracy.

“He has changed,” Finkenauer said of Grassley during an interview with Radio Iowa. “He is not the same person that I remember him being and that makes me sad. I wish he was.”

Finkenauer said Grassley is “desperate to cling to power” after nearly 50 years in Washington and that’s why Grassley “went crawling back to Donald Trump.”

Jim Carlin, a state senator from Sioux City who describes himself as a pro-Trump Republican, has said he’ll challenge Grassley in the June GOP Primary. Carlin was in the audience for Trump’s rally in Des Moines.