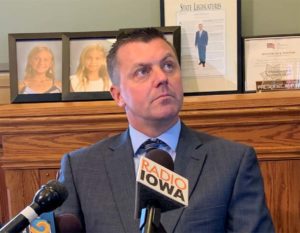 The top Republican in the Iowa Senate is pushing back against Democrats who say the Republican-led legislature intends to adopt new maps for congressional and legislative districts that favor Republicans.

“Iowa law is very specific about how districts need to be drawn. It has be within a certain compactness, a certain population deviation. You have to keep cities together as much as possible, so what they’re doing in Illinois or Oregon or a lot of liberal states that truly are gerrymandering is not something that’s allowed under Iowa law,” Senate Majority Leader Jack Whitver, a Republican from Ankeny, said on “Iowa Press” on Iowa PBS.

Last Tuesday the 32 Republicans in the Iowa Senate rejected Plan 1 for redistricting. Whitver said no plan can provide districts with an equal number of residents, but the first plan had some wide swings when comparing the population count in each legislative district.

The non-partisan Legislative Services Agency will deliver Plan 2 on October 21 and the governor has called the legislature to convene on October 28 to vote on it. The Democratic leader in the Iowa Senate has called on Republicans to promise not to offer amendments to a third set of maps — if the set second is rejected.

“I don’t think we should accept any plan that we’ve never seen and so we’re just going to take this one step at a time,” Whitver said Friday. “I’m not going to say we’re going to accept or reject Plan 2 until we see it, which is the fair way to do it.”

Whitver isn’t predicting how legislators may vote on the not-yet-revealed Plan 2 for redistricting. “I would hope for the sake of the process that it’s a plan that we get to caucus, everyone likes it and we just approve it because that’s a lot easier,” Whitver said, “and then we can move on to the election cycle that’s approaching very quickly.”

The boundaries for legislative and congressional districts are redrawn every 10 years to account for population shifts. The data from the 2020 Census, however, was delivered to states five months late and Whitver said that’s delayed candidate recruitment and campaigning for the 2022 election. Due to constitutional deadlines, the Iowa Supreme Court is technically in charge of redistricting right now, but the court given lawmakers until December 1 to approve a redistricting plan.

“They have a constitutional deadline on the court that a lot of people don’t talk about — December 31, so if for some reason we can’t agree, we can’t come up with a map and it’s turned over to the court, they have ’til December 31 constitutionally, so I think that’s probably what they’re worred about is having enough time that, if it got to that point, they’d have enough time to fix the map or change the map,” Whitver said. “I don’t expect it to get to that point. I hope that we can agree on map two and move forward.”