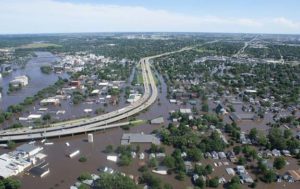 The city of Cedar Rapids will spend 10 million dollars of its federal pandemic relief funds on its Flood Control System.

Flood control program manager, Rob Davis, says the federal funds will help speed up construction on the west side of the river, providing more protection sooner.

“This 10 million dollars basically will allow us to accelerate those projects. We are looking, with the Army Corps of Engineers, where the east side will be done later this decade,” Davis says. “So this…this is a big deal because it can…really helps make sure we’re on schedule for completing this.”

The sprawling network of levees and gates was created after the 2008 flood devastated the city. Al Pierson is the president of the Northwest neighborhood association — and is hopeful the new funding will boost redevelopment that’s already in the works.

“The grocery store, commercial, restaurants…so things are starting to happen. And people are looking ahead to the flood protection coming with the knowledge that they’ll be safe,” Pierson says. City officials say this will also add pressure to the dozen or so property owners who are in the way of the flood system and have not yet taken the city’s buyout.

Construction on the system is expected to cost 750 million dollars.