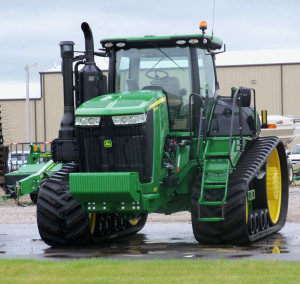 John Deere workers are preparing to strike if the company does not improve its offer to union negotiators by midnight tonight.

Members of the United Auto Workers in Iowa, Illinois and Kansas voted down a proposed contract Sunday that included five or six percent raises for factory workers. Iowa State University economist Peter Orazem says John Deere’s stock price has doubled in the last two years, but factories are struggling to fill jobs. He says that gives the union leverage to demand more.

“The company itself is doing quite well and is in a position to expand and that’s a very good time for labor to press for wage increases, and that hasn’t been true for many years,” Orazem says. Orazem says if workers do strike he expects it to be short since John Deere has an interest in capitalizing on the current strong demand for farming and construction equipment.

At the University of Iowa Labor Center, Paul Iverson the Deere dispute ties into the trend of people reexamining work relationships during the pandemic. “You know there’re companies, Deere included, that are having record profits and I think that a lot of workers are saying that we deserve a share of that,” Iverson says.

If the two sides can’t come to a contract agreement — we could see the first Deere strike since 1986.