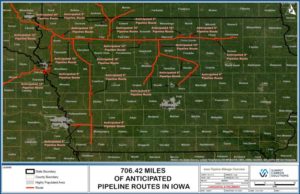 A proposal to build what’s called the world’s largest carbon dioxide pipeline is drawing opposition from Iowa farmers and environmentalists.

Summit Carbon Solutions plans to build 700 miles of pipeline across Iowa to capture carbon from ethanol plants and bury it deep underground in North Dakota. Beth Richards’ family farms in Hardin County, which is in the proposed path, and she questions how landowners would benefit from the project.

“Why should landowners welcome encroachment on their land for a project that doesn’t pay direct dividends to them other than a vague promise that ethanol is good for corn prices,” Richards says. “And why isn’t rent going to be paid for the land or profits shared with farmers?”

Summit officials say they see the project as a way to keep ethanol viable and secure a market for Iowa corn. In a public meeting Tuesday, Iowa resident John Norris said the project is a false solution to climate change.

“As much as the ethanol industry is important to Iowa, it is an industry that’s on the decline,” Norris says. “The next two decades we will see a continued decrease in the demand for ethanol. We need to start planning for what’s next.”

Summit is in the process of holding public meetings in the 30 Iowa counties the pipeline would pass through. After the meetings are held, the company can petition state regulators for a permit.