You are here: Home / News / Congressman Feenstra says inflation putting an extra tax on everyone 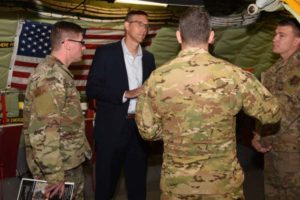 Congress passed a short-term appropriations bill to keep the government funded through December 3rd. That has briefly delayed the discussion on President Joe Biden’s Trillions of dollars of proposed spending.

Iowa Republican Congressman Randy Feenstra says there needs to be a discussion about cutting the spending. “Frankly, I look at it and say we’ve got to figure out a way to start looking at our debt. We are talking 30 trillions dollars of debt. I look at it, raising debt and say what are we doing to get back to what Iowa does to having a balanced budget,” Feenstra says.

He says he wants that balanced budget discussion is key for him to support any debt ceiling increase. He says inflation is already creating what he calls a new tax on Americans. “It’s an extra tax for everyone. Right now everyone is paying from seven cents to 11 cents. On gas you are paying an extra 40 cents — that’s a tax to everyone. When you buy your goods at the hardware store, grocery store, that check that you have that money you are making just doesn’t go as far,” Feenstra says. “I think inflation now if five-point-eight percent — and it’s not transitory — it’s going to be here a long time.”

One element of the Democrat’s spending package that Feenstra says is a non-starter for him is having all personal bank deposits of 600 dollars or more reported to the IRS. “The reason they are going down that path is they believe that you can catch over 500 billion dollars of people doing stuff illegally,” Feenstra says. “To me, it is a complete overreach, it’s against my first amendment, government encroaching into what I am doing. I don’t see it in this bill anymore — we’ve made a lot of noise about this.”

Feenstra made his comments following a tour of the 185th Air National Guard Refueling Wing in Sioux City.