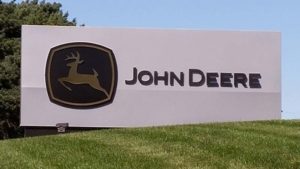 Ninety percent of union workers rejected Deere’s initial contract offer and more than 10,000 workers at 14 John Deere plants and distribution centers have been on strike since last Thursday.

Union members say Deere’s initial offer did not meet their wage and retirement goals, plus the union says it’s important to end a two-tiered pay system that ensures younger workers get less. A spokeswoman for the company says John Deere is fully committed to the collective bargaining process, resolving the strike and giving production and maintenance workers the opportunities to earn the best wages.

Revenue for the first three quarters of Deere & Co.’s current fiscal year is up 11% and net income is up 84% compared to the same portion of 2019, before the pandemic hit. The turnout at many picket lines today was larger than it had been in the opening days of the strike.