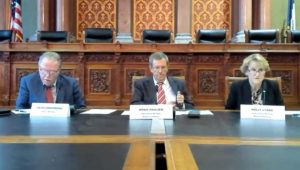 The state panel which estimates the amount of money the state will take in now has the final numbers for the state fiscal year completed in June.

Holly Lyons of the Legislative Services Agency is one of three members of the Revenue Estimating Conference. “As of two weeks ago, the fiscal year 2021 books are closed and revenue came in much higher than the March REC estimate. Like most states, we missed it big — but of course it is better to be on the high side than the low side. In both dollar and and percentage terms — fiscal 2021 exceeded any year since at least fiscal year 2001,” Lyons says.

She detailed some of the numbers in the REC’s meeting Friday. “General fund net revenue for the year increased 870 million and 11 percent when compared to the fiscal year 20 level. And exceeded the REC estimate by 737.1 million — or nine percent,” Lyons says.

She says federal money helped the economy that had dropped during the pandemic in the previous year. “This growth reflected positive consumer confidence in the form of pent up demand for goods and services, an improving economy, and massive federal assistance in the form of stimulus payments, child tax credits, extended unemployment benefits, and the paycheck protection program,” according to Lyons.

Lyons says the state is facing a lot of “headwinds” in the new fiscal year, including inflation, interest rates, and the worker shortage. “The question is what happens as the impact of that stimulus money fades. Wage and salary income looks fine now — despite the reduction in employment — but come late spring and summer next year, Iowans as a whole may not have as much money to spend as they did the previous year,”Lyons says.

The other two members of the panel issued the same cautions as the state continues through the new fiscal year.