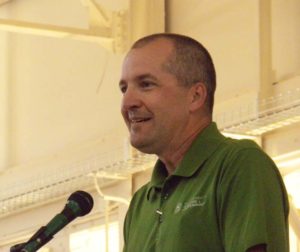 Iowa Agriculture Secretary Mike Naig says farmers are part of the conversation about capturing and storing carbon because common soil conservation practices can reduce the amount of carbon dioxide in the atmosphere.

“Things like cover crops and no-till and nitrogen use efficiency and conservation tillage,” Naig said.

“The play here is for lowering the carbon intensity score of ethanol,” Naig says. “That makes sense. That can work and you can put a project together related to that, so we’ll see where else that can go.”

Naig says fertilizer plants might be able to link to a carbon pipeline as well. Naig is vice chair of the carbon sequestration task force Governor Kim Reynolds appointed in late June. The group is scheduled to meet tomorrow and discuss policy recommendations for lawmakers.