You are here: Home / Human Interest / Iowan writes of her family’s friendship with Sitting Bull in new book 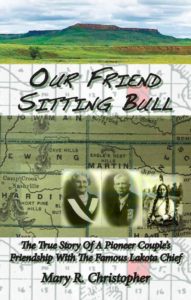 One of the most famous Native American leaders from around the time Iowa was being settled plays a prominent role in a new book, written by a central Iowa woman about her ancestors.

Mary Christopher, a real estate agent in Des Moines, tells about the experiences of her great-grandparents, pioneers Lizzie and George Dell, in the book “Our Friend Sitting Bull.” “They passed on a lot to the generations that came after them and all of those generations have nurtured the stories,” Christopher says. “We have a huge group of cousins all over the nation who have all heard bits and pieces of this over the last 80 to 100 years.”

The Dells, who were married in Cresco in the 1880s, took covered wagons westward over a four-month journey and settled deep in the Dakota Territory. One day, several men on horseback arrived at their frontier log cabin, including the Lakota leader, Chief Sitting Bull.

“He came to the door with these other gentlemen looking for medicine, not knowing my great-grandfather had been a medic in the Civil War,” Christopher says, “and he also had a book with him that he brought out from Iowa showing how to make various medicines and ointments, which he proceeded to do.”

It’s believed Sitting Bull had been taking part in a fertility ritual in which Native American braves would stare at the sun for three to four days. His eyes were red and swollen and that’s why he was seeking help from the settler, George Dell. “After he made the ointment for Sitting Bull’s eyes, he asked the gentlemen if they’d like to stay for dinner and they said they would,” Christopher says. “He would have had some dried meat or bacon, some potatoes, canned vegetables, canned fruit — that kind of thing — to offer them. So they all stayed and ate together.”

Coincidentally, Lizzie Dell was back in Iowa at the time, giving birth at her parents’ home in Cresco. As is tradition, after the meal, Sitting Bull produced some tobacco and a long pipe which he lit and passed among the men to smoke. “My great-grandpa offered to buy the sacred pipe from Sitting Bull, he said, ‘Otherwise my wife will never believe this story,’ and Sitting Bull sold him the pipe for $5,” Christopher says. “But Sitting Bull, through the interpreter said, ‘I’ll sell you the pipe, but we’re going to come back and eat with you and smoke it anytime we come through this region,’ and that’s what they did.”

She says Sitting Bull returned to the Dell homestead between two and four times a year until his death in 1890. Christopher’s 93-year-old aunt, a retired university professor, is her only living relative who knew the Dells and that aunt did research over decades, which provided inspiration and the backbone for the book.