You are here: Home / News / Harvest continues moving forward ahead of average 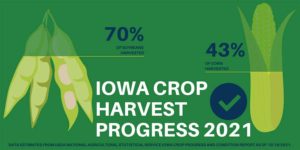 The U.S.D.A. weekly crop report says farmers were able to work around some rain showers.

The report says more than half the soybean crop remaining to be harvested is in south-central Iowa — while all other districts have at least 52 percent pulled from the fields.