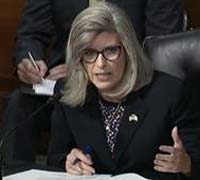 U.S. Senator Joni Ernst is a lead sponsor of legislation calling on the Pentagon to assess its suicide prevention efforts. Recently released data indicates there was a 15% increase in military suicides last year compared to 2019.

“There are bureaucracies in such a large organization and so what we want to do is strengthen collaboration between all of the different offices within the Department of Defense,” Ernst says, “so that we can really dig in and evaluate the effectiveness of their suicide prevention efforts.”

The bill directs two agencies within the military that are focused on suicide prevention to improve data collection and reduce duplication. Ernst says there also should be better training throughout the ranks on what to look for to help prevent suicides.

“We’ve found both with our active duty members and with our veterans it is very hard sometimes for them to step forward and be the one that is asking for help when they are used to being the helper,” Ernst says.

The number of Army National Guard soldiers who took their own life increased by 35% in the past year. Ernst, a retired Iowa National Guard commander, and Arizona Senator Mark Kelly, a combat veteran and retired astronaut, are the bill’s lead sponsors. More than 30 other senators from both parties have signed on as co-sponsors of the “Save Our Servicemembers” or SOS Act.