You are here: Home / News / Grinnell College Poll finds 28% of Republicans have high trust in doctors 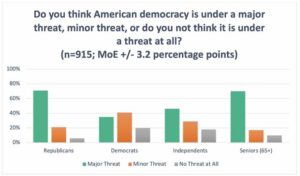 “We have 52% of Americans who believe the economy will be doing worse in 12 months than it is today. Now, that’s a turn around. In previous editions of our poll we found Americans to be more confident,” Hanson says. “…I think that’s rooted in the fact that there’s been a lot of concerns about inflation, continuing concerns about the job market as Covid continues to have this ripple effect throughout our economy.”

The poll found if the 2024 election were held today, it would end in a tie between Biden and former President Donald Trump. Seventy-one percent of Republicans who responded to the Grinnell College Poll said they feel democracy is facing a major threat, and 38% of Republicans nationally said they’re not confident the votes cast in the 2022 election will be counted correctly.

“Consistent with the broader mission of our poll, we asked a set if questions designed to assess the health of American democracy,” Hanson says, “so we asked people how they believe our democracy is doing and then different questions being who in society they trust and what some of their attitudes are about different kinds of freedoms they have.”

Only 7% of all the Americans surveyed said they had confidence in the federal government’s ability to solve problems and only a quarter expressed confidence in their own state’s governor. The Grinnell College National Poll found large majorities of Democrats trust doctors and scientists, but fewer than a third of Republicans trust scientists and 48% of Republicans expressed trust in doctors.