You are here: Home / News / State Trooper dies from injuries suffered in crash 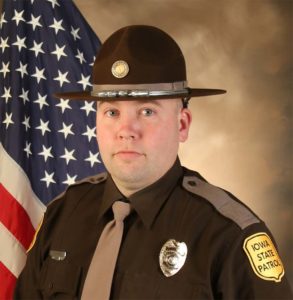 The Iowa State Patrol says a Trooper who was involved in an accident last week has died.

The Patrol says Trooper Ted Benda’s car crashed last Thursday as he was on his way to assist the Clayton County Sheriff’s Office with a wanted suspect. He has been in the hospital since the accident and has died from his injuries.

Trooper Benda joined the DCI in 2005, assigned to the Special Enforcement Operations Bureau in Marquette. He transferred to the State Patrol in 2016, assigned to District 8 in Mason City, and most recently working out of the District 10 office in Oelwein. Trooper Benda leaves behind his wife, Holly, and their four young children.

Benda is the second trooper from Post 10 to die this year. Trooper Jim Smith was shot and killed on April 9th while trying to help in the arrest of Michael Lang in Grundy Center. Lang was charged with first-degree murder, attempted murder, and assault on a peace officer. He is awaiting his trial after pleading not guilty.