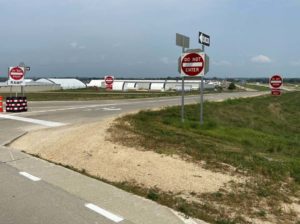 The Iowa Department of Transportation has been putting up new signs at intersections and interchanges on state highways to try and prevent more people from going the wrong way.

DOT traffic safety engineer, Willey Sorenson, says it started with a study along Highway 30 near Ames around 10 years ago. It then expanded with the gathering of lots of information. “So we kind of have started from nothing and grew a statewide database. And we ranked all 467 interchanges that we have in Iowa,” Sorenson says.

They started with an intersection ranking guide from the University of Auburn that used crashes, volume of traffic, proximity to liquor stores, and the type of interchange. He says they added 911 wrong-way calls during the day that didn’t involve a crash.
“If you can measure the people who are going the wrong way during the daytime — it will help us find the hot spots of where they are going during the nighttime,” he explains. 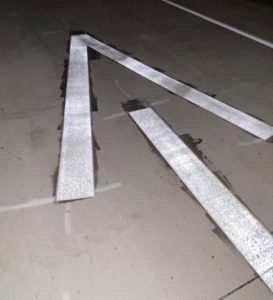 Sorenson also included GPS navigation in his data — as some drivers follow them to the word. “I’ve actually documented a couple of locations where it will say ‘turn right in on thousand feet.’ Well, some drivers don’t necessarily know if that ramp is at 500 feet — they may turn down that ramp the wrong way. So, there’s a component of that,” according to Sorenson.

He says around 90 percent of people realize they are going the wrong way and turn around without 500 to 1,000 feet of making the mistake. “We put out 62 cameras that actually have the ability to kind of detect a wrong-way driver and then record it and then send us an alert that documents it….so it has helped us to come up with some better numbers. And to see if the treatments that we did do work — because if they didn’t work — we need to do something else,” Sorenson says.

He says the signs go along with pavement markings that are designed to make it very clear you are going the wrong way. The says the signs are the same ones they’ve used in the past — but they are larger, more strategically placed, and aimed to catch a driver’s attention. The intersections on Highway 30 where you cross two lanes to get to the lanes on the other side going the opposite direction were some of the big problem areas. Sorenson says these “grade level” crossings on other sections of highway also got new signage.

“The Iowa 60 corridor way up in northwest Iowa to Sioux City, the diagonal is one corridor, and then Highway 30 is in that grade, and Highway 163 on the east side of Des Moines, we did some signage enhancement there,” he says. Sorenson says they will go beyond signs if they find wrong-way drivers are still an issue. At one Highway 30 intersection, they put in an acceleration lane.

“We did all kinds of signage, but there were still people going the wrong way, so we kind of changed that environment, we built this acceleration lane.” Sorenson says. “We did that last year and I off the top of my head I think we have not had a wrong-way driver on that one since that. We were averaging one a month or every two months — I think that worked.”

Sorenson says they will be around 50 percent complete getting the new wrong way markings and signs in by Thanksgiving.